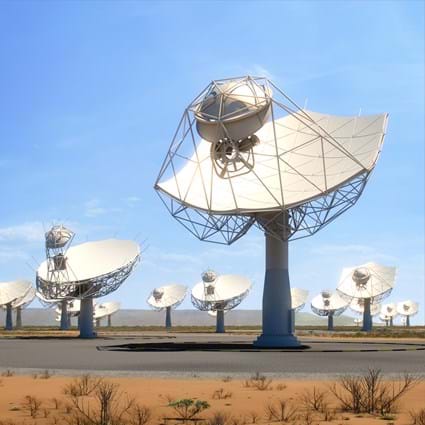 The SKA Observatory (SKAO) officially launched in January 2021, after receiving formal approval and ratification from its member countries. The intergovernmental organisation, headquartered at the historic Jodrell Bank Observatory in Manchester, UK, will oversee an international effort to build the Square Kilometre Array (SKA) telescope, the largest radio telescope in the world once completed. Over 1500 scientists and engineers across 20 countries have contributed decades of planning to mark the lead up to the beginning of the SKA’s construction period and eventual operation in the late 2020s.

One site in South Africa will host 197 dishes (each one 15 meters in diameter) and a further 131,072 antennas (each one 2 meters tall) will be constructed in Australia. The SKA telescope will have the highest sensitivity ever reached in the 50 MHz – 25 GHz range in a radio telescope. The SKA will acquire high resolution images of many physical phenomena over large areas of the sky.

For example, the SKA telescope will measure the 21-cm emissions from high-redshift sources in order to map structures in the early universe. The images will provide detailed information about the dynamical processes and the evolution of galaxies and stars in a way that current instruments cannot.

The SKA telescope will shed light on fundamental questions about dark matter and dark energy, which together account for approximately 95% of the matter-energy content of our universe about which we still know very little. For instance, the SKA will be used to study the distribution of hydrogen in galaxies, from which one can infer their rotational velocity curves, their mass distributions, and determine the distribution of dark matter. The SKA telescope will be sensitive enough to search for satellite galaxies that present telescopes cannot detect; thereby providing new clues about the nature of dark matter.

The SKA telescope will also make precision measurements of the distribution of the effects of magnetic phenomena from stars and galaxies and the way that this impacts the density distribution of cosmic rays in the interstellar medium. Fine measurements of the magnetic fields away from the galactic centres will augment our understanding of how galaxies evolved in the early universe. This in turn will help to confirm, constrain, or rule out relevant models in which dark matter and dark energy play a key role.

The SKAO will collaborate with gravitational wave observatories around the world. When a gravitational wave is detected, and the SKA observes the radiofrequency spectrum in the sky at the same time, complementary data can be used to construct new precision tests of Einstein’s Theory of General Relativity.

Researchers at the Oxford e-Research Centre in the Department of Engineering Science at the University of Oxford are excited that the project and the organisation have reached this important milestone. The group, led by Professor Wes Armour, are contributing to the telescope’s image domain processing capabilities and enhancing the science reach of the project. They are investigating CPU/GPU-accelerated algorithms, digital signal processing, and the potential for applications of AI and machine-learning techniques in order to increase the data throughput of the telescope during image reconstruction.

According to Cees Carels, Research Software Engineer on the Square Kilometre Array project;

“The SKA is an excellent example of the unique opportunities that global scientific collaboration unlocks. Importantly, it will advance our understanding of the universe, and it is exhilarating that we will solve unprecedented computational and engineering challenges in the process.”